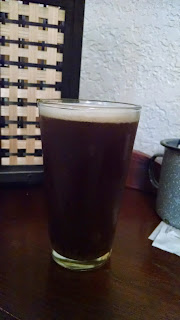 This past Sunday I transferred it to the keg. I had planned to bottle this batch and keg a summery brew, but since I'm hosting a brew session this weekend and wanted something to sample, I changed my mind. Worse comes to worse, I'll use the homemade counter-pressure bottle filler Dad and I built to bottle off the keg.

After three days in the keg I dropped the pressure and pulled the pint pictured here. It pours a murky chocolate brown, with about a half inch of creamy head. The aroma is dark malt and oak. The taste is dark fruits, oak, Guinness and sweet red wine -- balanced, but with little discernible hop aroma or flavor. It is murky brown from top to bottom, like the Tahquamenon when it's running high with spring runoff, and it strikes me that it will get better with age. That's a happy thought, since it's pretty solid to start with!

If you're reading this and in the greater St. Michael-Albertville area, a couple of us will be brewing on Sunday from noon to 4 or so at the Thorp garage. Next up for me is Northern's California Common kit -- a hybrid brew (a lager brewed at ale temps) based on the authentic American beer style known as steam. (Anchor Steam is a long time favorite of mine, though whether it taste anything like historic steam beer I do not know.) Feel free to stop by and sample some Mustache Envy -- and if you'd like to brew, you're welcome to do so. Cheers!
Posted by J. Thorp at 5:24 PM No comments:

Most of you locals know that the local hobby shop, Kremer's Toy and Hobby, sells Brewer's Best homebrewing kits and supplies, and they often run specials. So a while back I went in with a few extra bucks and a coupon, and decided to brew my first wheat beer -- not some lemony summer brew, either, but a dunkelweizen, a relative rarity among the imports and craft brews crowding local beer shelves. My dad likes a dunkel when he can get it, and Weihenstephaner seems the most frequently available to me (and a world-class example, apparently). Both Beer Advocate and Rate Beer describe dunkels as what I would call "swampy" beers: dark, murky, yeasty, unfiltered beers, brown in color, earthy in flavor.

This dunkel brings the fruit and the funk of wheat beers, big time. Both websites above mention banana and clove notes, but I tend to taste pear undertones in mine. It is same murky brown of the Tahquamenon River when it's swollen with runoff, with a sour yeastiness that is far more enjoyable that it sounds and serves in the place of hops to balance the sweetness of the grain. It comes off the keg with a thick, creamy head and invites sip after sip. A good fall brew that's a big change of pace for me -- hope you like it, too!
Posted by J. Thorp at 6:22 PM No comments:

Just checking back in to say what a difference a month (or two) makes! Another few weeks in the keg (as Butch suggested), and Northern Brewer's Brunch Stout kit took on a smoother, deeper, more flavorful persona, with a thicker, creamier head and that appearance at the pour that I describe as "fallout," in which the bottom of the head appears to settle toward the bottom of the glass. (You seen this before if you've ever seen pint of Guinness fresh from the tap; sorry for the lame description.)

Karl came over with his counter-pressure bottle filler to help me fill some canister-top brown bottles for a family function in Wisconsin -- my uncle was celebrating his 70th birthday and 30th anniversary, and requested that I bring beer. I didn't want to bring the keg, partly for logistical reasons, and partly because this is not a beer for everyone and not a beer for a binge. (It would've broken my heart to see half-consumed plastic cups of brunch stout warming in the morning son after the celebration.) The bottles went over very well, however: Uncle Mel enjoyed it; Aunt Sandy turned green; my dad, my cousin's husband, and a local microbrew enthusiast all loved it. All good signs.

I recommend the kit whole-heartedly now, only give it time to mature. I'd love to taste it six months from now, but I'm afraid this keg is almost kicked. Cheers!
Posted by J. Thorp at 7:49 PM No comments: 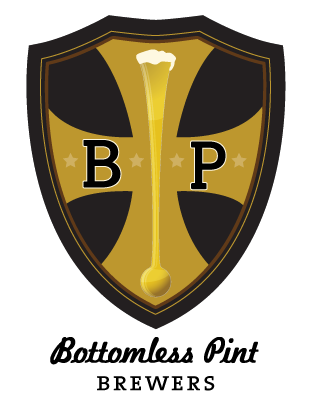